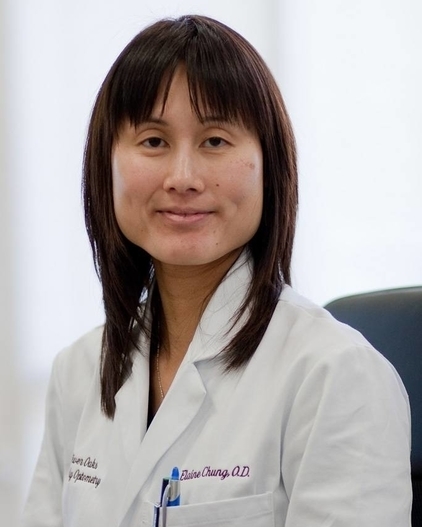 Dr. Elaine Chung received her Bachelor of Arts degree in 2001 from the University of California, Berkeley majoring in Molecular Cell Biology.  In 2005, she earned her optometry degree from State University of New York, College of Optometry.  She was a member of Beta Sigma Kappa, an International Optometric Honor Society that promotes academic and scientific excellence as well as high moral standards in the profession of Optometry.  During her optometric training, she went on mission trips to perform vision screenings in Dominican Republic and Nicaragua.

Dr. Chung further achieved her optometric training in a residency program emphasis in Primary Care and Low Vision Rehabilitation at the Veterans Affairs Hospital in Palo Alto.  In her residency training, she had the opportunity to share her knowledge with interns and worked with veterans who were visually impaired due to macular degeneration, diabetic retinopathy, glaucoma and retinal dystrophy.  She recognizes the difficulty that the visually impaired community is experiencing, and she enjoys helping these individuals adapt to their new lifestyles through use of various low vision devices.  Dr. Chung is glaucoma certified, and she continues to practice to the fullest scope of optometry in California.